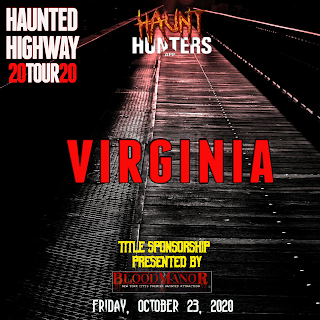 Leesburg, VA - Haunt Hunting Virginia 2020 is broadcasting live on the Haunt Hunters App with Speed by Chuck Mound presented by Blood Manor, NYC.  Some great Haunted Attaractions reside in Virginia and you can start with the famous Shocktober. One of the aspects that boosts Haunts is authenticity and at Shocktober you have it comes off the walls.

In 1879, Dale Carlheim built Carlheim Manor, in Leesburg, VA, for his family home and estate. Shortly after the family moved into the mansion, Dale was touring the grounds and discovered a series of large caverns, including an underground lake, below the house. During his exploration of the caverns, he stumbled upon a group of unmarked graves and inadvertently disturbed the bodies. Soon afterward, his family began experiencing strange occurrences that became more violent with each passing day. Within a few months, his wife and children had all been killed by unexplained accidents, and Dale himself disappeared, never to be seen again.

Over the course of the following century, Carlheim Manor was used for many purposes. But everyone who lived and worked in the house died of mysterious or unexplained causes, or simply disappeared. Eventually, the mansion and grounds were abandoned, and the grisly stories of murder and horror were forgotten.

Some of the other Haunted Attractions in Virginia Include the great Red Vein Haunt in Richmond, which follows an amazing story line that brings fans from all over the state.

The Haunted Highway Tour 2020 will be broadcasting live on your smartphone on the HauntHuntersApp.

Check Out the Haunt Hunters App Your Tube Channel