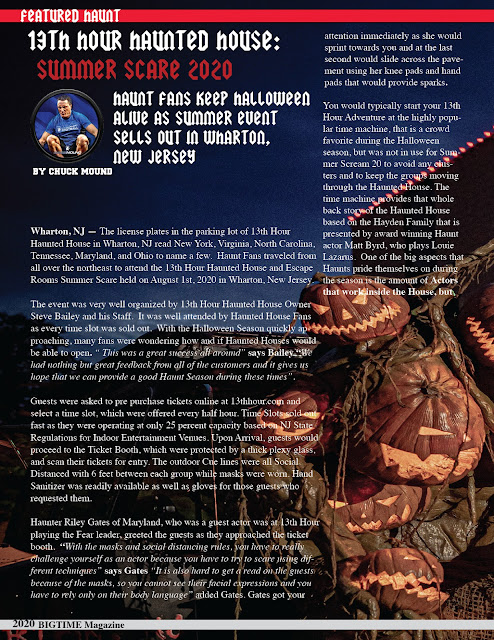 The event was very well organized by 13th Hour Haunted House Owner Steve Bailey and his Staff. The event was well attended by Haunted House Fans as every time slot was Sold Out.  With the Halloween Season quickly approaching, many are wondering how and if Haunted Houses would be able to open. “This was a great success all around” says Bailey “We had nothing but great feedback from all of the customers and it gives us hope that we can provide a good Haunt Season during these times”. 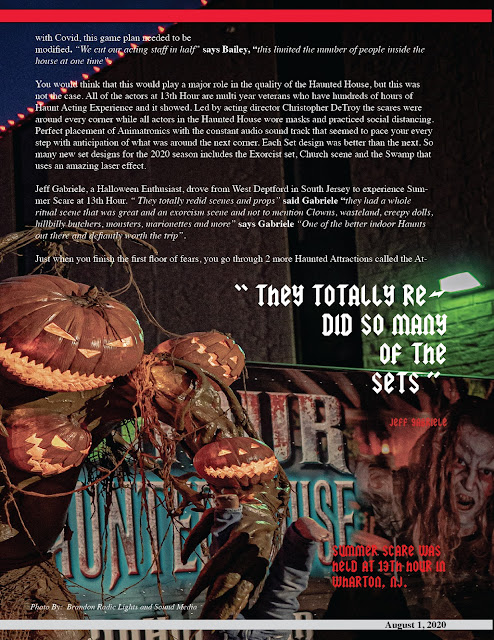 Guests were asked to pre purchase tickets online at 13thhour.com and select a time slot, which were offered every half hour. Time Slots sold out fast as they were operating at only 25 percent capacity based on NJ State Regulations for Indoor Entertainment Venues. Upon Arrival, guests would proceed to the Ticket Booth, which were protected by a thick plexy glass, and scan their tickets for entry. The outdoor Cue lines were all Social Distanced with 6 feet between each group while masks were worn. Hand Sanitizer was readily available as well as gloves for those guests who requested them.

Haunter Riley Gates of Maryland, who was a guest actor was at 13th Hour playing the Fearleader, greeted the guests as they approached the ticket booth. “With the masks and social distancing rules, you have to really challenge yourself as an actor because you have to try to scare using different techniques” says Gates “It is also hard to get a read on the guests because of the masks, so you cannot see their facial expressions and you have to rely only on their body language” added Gates. Gates got your attention immediately as she would sprint towards you and at the last second would slide across the pavement using her knee pads and hand pads that would provide sparks. 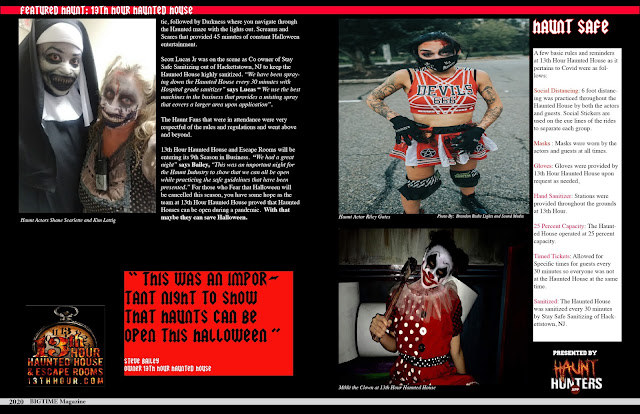 You would typically start your 13th Hour Adventure at the highly popular time machine, that is a crowd favorite during the Halloween season, but was not in use for Sumer Scream 20 to avoid any clusters and to keep the groups moving through the Haunted House. The time machine provides that whole back story of the Haunted House based on the Hayden Family that is presented by award winning Haunt actor Matt Byrd, who plays Louey Lazarus. One of the big aspects that Haunts pride themselves on during the season is the amount of Actors that work inside the House, but with Covid, this game plan needed to be modified. “We cut our acting staff in half” says Bailey, “this limited the number of people inside the house at one time”. 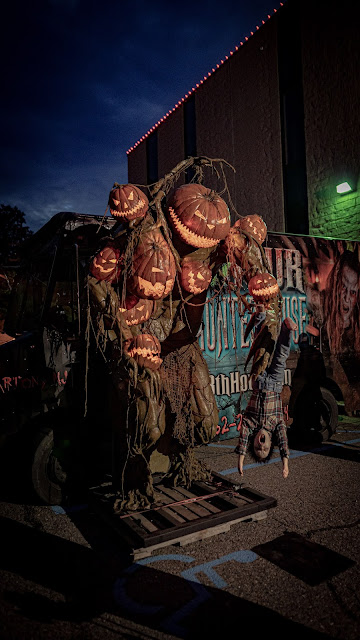 Photo By Lights and Sound Media

You would think that this would play a major role in the quality of the Haunted House, but this was not the case. All of the actors at 13th Hour are multi year veterans who have hundreds of hours of Haunt Acting Experience and it showed. Led by acting director Christopher DeTroy the scares were around every corner while all actors in the Haunted House wore masks and practiced social distancing. Perfect placement of Animatronics with the constant audio soundtrack that seemed to pace your every step with anticipation of what was around the next corner. Each Set design was better than the next. So many new set designs for the 2020 season includes the Exorcist set, Church scene and the Swamp that uses an amazing laser effect.

Jeff Gabriele, a Halloween Enthusiast, drove from West Deptford in South Jersey to experience Summer Scare at 13th Hour. “They totally redid scenes and props” said Gabriele “they had a whole ritual scene that was great and an exorcism scene and not to mention Clowns, wasteland, creepy dolls, hillbilly butchers, monsters, marionettes and more” says Gabriele “One of the better indoor Haunts out there and defiantly worth the trip”.

Just when you finish the first floor of fears, you go through 2 more Haunted Attractions called the Attic, followed by Darkness where you navigate through the Haunted maze with the lights out. Screams and Scares that provided 45 minutes of constant Halloween entertainment.

Scott Lucas Jr was on the scene as Co owner of Stay Safe Sanitizing out of Hackettstown, NJ to keep the Haunted House highly sanitized. “We have been spraying down the Haunted House every 30 minutes with Hospital grade sanitizer” says Lucas “ We use the best machines in the business that provides a misting spray that covers a larger area upon application”.

The Haunt Fans that were in attendance were very respectful of the rules and regulations and went above and beyond.

For those who Fear that Halloween will be cancelled this season, you have some hope as the team at 13th Hour Haunted House proved that Haunted Houses can be open during a pandemic by following all of the safe and effective guidelines presented.